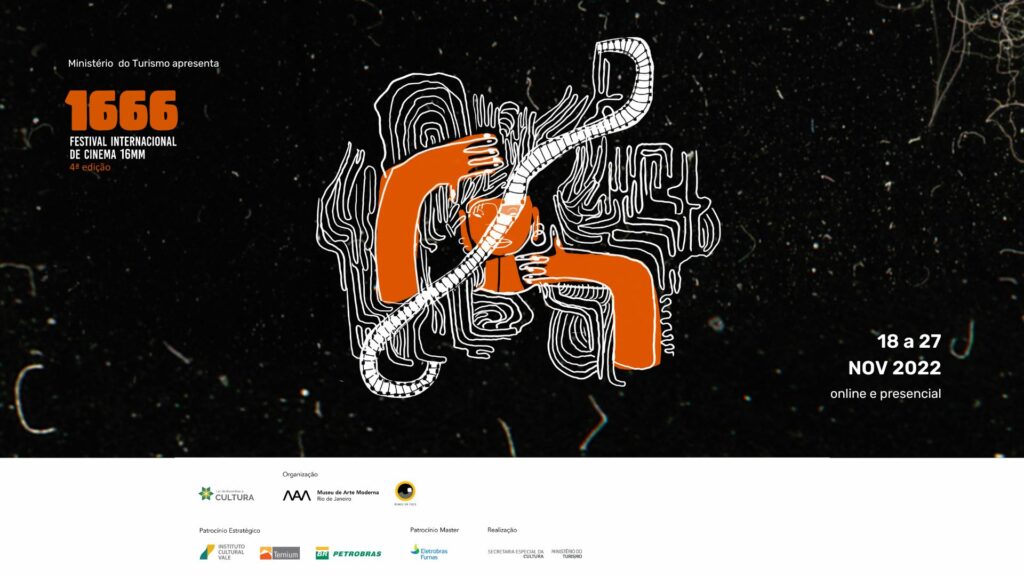 1666 Festival is an independent production of Coletivo Mundo em Foco and in its 4th edition will be co-realized by MAM-Rio, with the support of Festival Super OFF de São Paulo and Lab.Irinto.Lab.

The 1666 Festival emerges from the desire to think about and value cinematographic productions that use the 16mm format as the main support for capturing images. By bringing the public’s attention to the use of the 16mm format in cinema, we aim to discuss the particularities, potentials, expressiveness and narratives present in the films. Along with the exhibition of films, 1666 also promotes parallel activities, such as debates, courses and workshops. We believe in this way to contribute to the transmission of knowledge and encourage the use of the 16mm as a tool for cinematographic creation, expanding the possibilities of the image beyond the hegemony of the digital.

In this edition, we reaffirm our commitment to the tripod that encompasses dissemination, educational activities and the importance of film preservation, understanding that our history is told by audiovisual images and constitute the memory of peoples. As in other years, in addition to the Contemporary Exhibition, there will be exhibitions of short films produced in workshops, as well as historical programmes that allow us to think about cinema from a temporal perspective.

A copy of the films shown at the Festival will be deposited at the Cinematheque of the Museum of Modern Art in Rio de Janeiro.

The 2022 edition has as a priority the holding of workshops. Movies will be released. If you are interested in showing your 16mm film with us, please send us the link to the film, the film’s technical file, by e-mail: [email protected]

2.2 – The director must provide, in the field of the registration form, the link to access the film (wetransfer, dropbox, ftp, vimeo, youtube or similar and your password, if any). It is the director’s responsibility to make sure that the copy of the work is in perfect condition and does not present problems of execution in conventional digital media players.

3.1 – Those who have their filmes selected will be notified by e-mail.

3.2 – Films invited by the curators may be also shown, not necessarily the submitted ones, or films submitted in previous years.

4 – Workshops and Single Take in 16mm (Only Brazil)

4.1 – Festival 1666, in partnership with Super OFF and Lab.Irinto.Lab, will offer workshops on film intervention and 16mm filmmaking.

4.2 – The films for the realization of the remote workshops and films of the call will be sent free of charge, but the directors must bear the costs of sending them back to the festival’s headquarters on the dates of 03 November (Intervention celluloid Workshop) and 07 November (Single take in 16mm). The address for sending the films is:

4.3 – The filmmakers of Single Take in 16mm must wait until October 17, 2022 for the festival email to approve their proposal, and if so, use EXCLUSIVELY the film provided by the festival. In addition, the director is responsible for getting the 16mm camera for filming.

4.4 – The film must be edited in the camera itself, during filming, and the use of photographic effects manipulated during the exhibition is allowed, but the film must not be developed by the director. After filming, the film must be sent to the organization’s address (see item 4.2). Once sent, the organization of 1666 + Lab.irinto.Lab is responsible for the development and reserves the right to project or not the developed films, whatever the results (registered filmmakers accept these terms and declare aware that their films can be projected even without any developed images).

4.5 Films from the workshops and 16mm single shots premiere and are screened in person during the festival. The films will also be digitized for free, as they will be made available in the festival’s online version.

5.1 – The films will be made available throughout the week of the Festival free of charge to all audiences, without geoblocking.

5.2 – We are aware of the importance of providing an exhibition fee for each film as an incentive and recognition of the work, but in this fourth edition, unfortunately, our budget does not allow it.

6.1- The “1666”, in its 4th edition, is an idealization of the Coletivo Mundo em Foco, in a co-realization with MAM-Rio, and has as its technical team:
Curatorship and Production Coordination: Isabel Veiga and Rodrigo Sousa & Sousa

6.2 – The 4th edition of Festival 1666 will be held in an online and presential version between November 18 and 27, 2022, on an online platform and presencial theaters.

7.1-  The Filmmakers or those responsible for the registration of the film are in accordance with the terms of this regulation and after their registration or being selected by the curator, authorize the organization of 1666 to use, without charge,parto of the content of images and sound from the submitted films, for the purpose of publicizing the event in any media, effective immediately after their selection.

8.1- Any omissions in this regulation will be resolved by the 1666 organization.